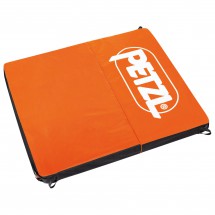 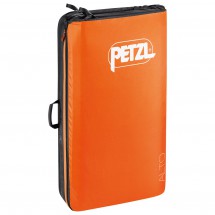 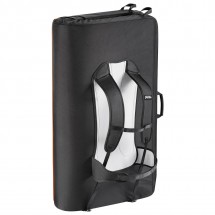 Productbeschrijving
Petzl's new Alto Crash Pad sits at the middle, in size, of its new line. All the features of Petzl's new crashpads will simultaneously have you wondering why it didn't make crashpads earlier, and how it managed to pack in so many features and nail it so well on the first attempt. Petzl clearly looked at things from an engineering standpoint, and just set out to solve all the common problems and complaints from previous crashpad designs.

Most people like to use their crashpad as a bit of a backpack, but probably everyone has had the unfortunate experience of losing something out of the bottom of the pad. Petzl solved this problem by running a durable zipper along three sides, effectively creating a backpack with a permanent top-opening. Many boulderers like to tackle problems when the conditions are less than ideal. This can mean anything from snow on the ground to mud and dirt everywhere. Because of this, the straps tend to get all gnarly and gross when lying on the ground under the pad all day. Petzl created an innovative system where the piece that zips around, when unzipped, actually folds back to cover the straps themselves, keeping them, and you, from getting dirty. Because Petzl designed this so well to be used as a backpack, it was clear that people were going to be carrying more weight in these than they had with previous crashpads. Petzl decided to accommodate this with wide, burly backpack straps that are comfortable, no matter how heavy a load you decide to carry. Two different layers of close-cell foam around the layers of open-cell foam create a dense, durable landing zone that won't bottom out. The closed-cell foam was also wrapped around the outside, meaning that it won't break down as quickly from being folded over and over again. As if all this wasn't good enough, Petzl added straps that allow this to be converted into a chair for use around a campfire. After all, nothing beats relaxing around a fire with a couple of cold ones after a hard day of bouldering.